A huge volunteer turnout in Warren County helped fill campaign literature bags on Wednesday evening.  The effort to stuff 12,000 campaign lit bags was spearheaded by Americans for Prosperity (AFP) and Warren County Tea Party.  For those who wonder what happened to the Tea Party, you don’t have to look any farther than the overwhelming response from those who gave their time.  The moniker, Totally Engaged Americans, was well-earned by those who volunteered.

Americans for Prosperity hosted the event from 6 to 9 pm at Mio’s Pizza in Lebanon and provided dinner for volunteers.  Over the course of the evening, more than a hundred people showed up to help with door to door efforts in Warren County. Some came from surrounding counties – Hamilton, Butler, and Montgomery.   The date was changed last week due to an unforseen medical emergency which necessitated rescheduling.

The group started around 6pm and worked until nearly 10 pm.  “We ran out of time and literature”, said Kelly Kohls of the Warren County Tea Party.  “AFP made it more fun by supplying food, drinks, and dessert for everyone.”  At the end of the evening, over 10,000 bags  filled two SUV’s and a car.

Volunteers worked tirelessly despite the tropical temperature  generated by crowded rooms.  The room was originally set up for sixty, which quickly  filled to capacity, overflowing to the main dining room,  and eventually sprawling throughout the entire restaurant. People kept coming, some as late as 8 pm.

Warren County precinct walk lists are being put together.  Walk lists and lit bags are available for distribution later this week through the Warren County Tea Party.  A similar volunteer response is needed for the door to door literature campaign. 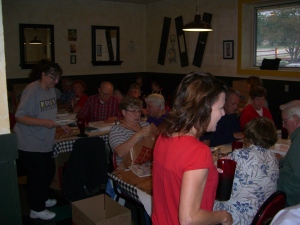