lican Vice-presidential nominee, Paul Ryan, is back to the tri-state again for another visit to rally the party faithful.  Set amid the rural backdrop of the Clermont County fairgrounds in Owensboro, Ohio, Paul Ryan energized the crowd of conservative and Republican voters who can potentially turn out the all-important southwest Ohio vote.  Ryan’s recent visits, along with those of Romney, Obama, and Biden, underscore the necessity of winning Ohio’s electoral votes, and are the key to winning the White House in November.

If Ohio is the battleground state, then both campaigns are making sure to get plenty of face time.  The “parade of candidates” through Ohio is unremitting as both sides chase the influential Ohio voter. Vice-president Joe Biden was in Milford on Sunday and visited Wright State University in Dayton on Wednesday afternoon.

Since becoming the VP nominee, Paul Ryan’s campaign visits to Ohio include:

The theme of “are you better off than you were four years ago” was continued.  The lineup of speakers included:

Paul Ryan made his entrance flanked by his wife, Janna, and his mom Betty.  He connected with the “locals” first, referring to his alma-mater, Miami University and his preference for Skyline Chili 5-ways and Montgomery Inn ribs.  He did not give similar praise to Who Dey beer.

There was a minor crowd disruption when Ryan’s speech was interrupted by a female protestor near the front row.  She appeared to be sitting on someone’s shoulders near the podium and unfurled a sign.  The sign was pulled down immediately and she was quickly and quietly escorted out by law enforcement officials. (Photo here)  Ryan did not miss a beat and continued with his remarks.

Highlights/quotes from Paul Ryan’s speech to the estimated crowd of 3000: 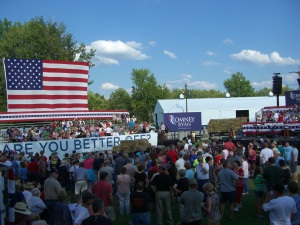 Ohio, are you better off?… 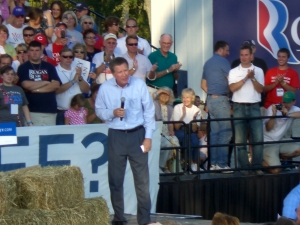 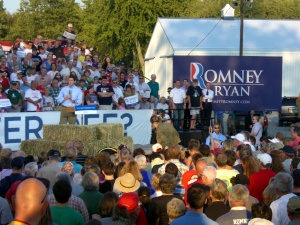 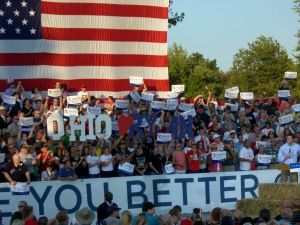 Paul Ryan speaks to his crowd of supporters. 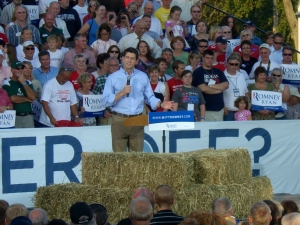 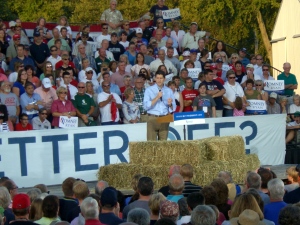 Some final selections and purchases in the parking lot. 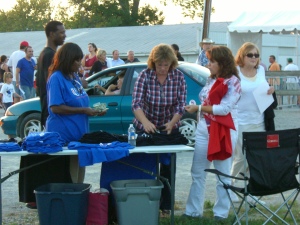