Deerfield Township Trustee: “I Understand Your Concern, But…”

Alexis De Touqueville’s quote bears repeating.  “We get the government we deserve.”  So it goes in the Kabuki Theater of power and government – even at the local level.

Deerfield Township trustees continued the May 7 public hearings for a major PUD modification at the June 4 meeting – a seeming reprise of talking points and explanations in the face of unanimous opposition from township residents in attendance (video).

To most, this is not sexy or interesting stuff, but illustrates a larger point.

Observing proceedings in May, the outcome seemed a foregone conclusion. The frequency and repetition of talking points used by developers and the line of questioning and comments by trustees lent the appearance of a collaborative effort (Video 1:10:00).

Harkening back to Blue Ash City Council’s vote on the sale of the airport in August 2012, trustees voted unanimously to approve the zoning change on June 4, despite public objections from every local resident present at both meetings – arguably those most impacted by the decision.

The vote was postponed from May due to the absence of trustee Pete Patterson.

Quotes from township residents and trustees at the conclusion of the meeting were illustrative.

The trustees meeting room was unusually crowded for both hearings as residents of Long Cove and project consultants for the petitioners came out in force for a zoning hearing on a PUD modification of 5.4 acres on Wilkens Boulevard (49:41).

Homeowners from Long Cove, an upscale three-time Homearama neighborhood on Wilkens Boulevard were there to vocalize concerns and oppose the proposed zoning change to a parcel of land on the corner of Wilkens Boulevard and Irwin Simpson Road.

The Grand, as proposed by developers, is comprised of 122 units in two three story buildings with an underground parking garage.  The high density one and two bedroom units are described as luxury apartments approximately the same height as Regal Cinemas directly across Wilkens.

At the May 7 meeting, trustee president Chris Romano twice instructed Long Cove residents to keep it pithy (Video :50 and 1:39)

“… We do have a rule that generally requests that you limit your testimony to five minutes.  Five minutes is an awful long time to talk if you’ve ever done any public speaking, and we also ask to pay attention to what the folks said before you and do your best to not repeat points that have already been made.”

“As I asked previously, if you would do your best to constrain to five minutes or less and try not to repeat stuff we’ve heard from other people before you.”

And listen to residents at the June meeting: 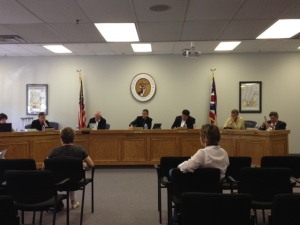 Unfortunately for those in attendance, developers were not given similar instructions about brevity of comments at the May 7 meeting.

At the June meeting, trustee Dan Corey referenced sustainability studies and revealed that the Natorp family, owner of the 5.4 acre parcel, also owns 50 lots in Long Cove, thereby concluding they did not want to harm property values. (1:03:45)

The May 7 meeting was held one day before the August Special Election filing deadline.  Trustees voted in March to place a sheriff’s levy on the August ballot.

Despite private and one on one communications with Romano and administration, the timing and cost of the August special election were never publicly revisited.

Romano privately asserted that if the levy were defeated in November, there is not enough time to come up with Plan B.

However, at the March regular meeting, township officials stated the need for a sheriff’s levy has been on the radar screen since November 2011.

Long Cove residents at the May meeting were unaware of the police levy on the August ballot, or the extra taxpayer costs for a special election.  The expenditure for the August Special Election will be as much as three times the $10,200 budgeted by Township officials for election costs in 2013.

North COAST opposes the timing of the August sheriff’s levy and Kim Grant read a statement at the June 4 meeting.

Before voting in favor of the PUD zoning change, trustees went to great lengths to explain “the big picture” long-term plan.  Because of current zoning plans, Romano said (video 1:00:25),

“Although the approved plan had some beautiful pictures, it could just as well be a gas station or dry cleaner or Dunkin Donuts…almost without coming before this board.” (Video 1:02:25)

“We had already worked really hard to set in place some processes that would hopefully remove a lot of the contentiousness from large-scale decisions like this.” (1:06:45)…”to rely on what the plan says.”

Pete Patterson explained the need for more township residents to support local retailers due to tough competition in Kenwood, Monroe, and Liberty Township.

“I tried as hard as I could to find something that told me that apartments per se drive down property values.  I couldn’t find it.”  (Video 1:22:35)…”I understand your concern,…but we’re in competition with a lot of other communities.”

Trustees belabored their struggles with this issue.

Corey, “I’ve been wrestling with this for 30 days…it hasn’t been easy this week,” and Romano, “We’ve done our hard part.”

Comments from Long Cove residents after the vote:

“Well I guess that goes to show you can’t fight City Hall.”

And to township officials:

“Thank you for listening to all of that.  We knew we’d probably lose, but we gave it a try.”

They ran for office for the power to make tough decisions and respond to the needs and concerns of the community.

Do trustees represent taxpayers and residents of Deerfield Township in word, or deed?

Mr. Romano is correct.  Elections do have consequences.

Many in government have forgotten – you work for us.

One response to “Deerfield Township Trustee: “I Understand Your Concern, But…””