The setting was a warehouse stacked with bundles of rebar and steel, the floor coated with a thick layer of dust.   The view from our “bus tour” was mountains of scrap metal of all types, some indeterminate. Byer Steel embodies the American dream.  They create something –   jobs, taxpayers, steel,  and pride in accomplishment and the American dream.  Comapnies like Byer Steel are the cornerstone of the American economy.

“As Ohio goes”….Ohio is getting more than its fair share of attention, as evidenced by the number of candidate visits this election season.

Paul Ryan, “This election is about a choice….Ohio has a huge opportunity”.  Winning Ohio is key to a Romney-Ryan victory in November.  Paul Ryan began a 3 day bus tour of Ohio on Monday in Lima, with a town hall at Byer Steel in Cincinnati, then teaming up with Mitt Romney for a rally at the Dayton International Airport, and stops in Columbus and Cleveland.  Other Ohio stops include Westerville, Toledo, and Bedford Heights on Wednesday.

Ryan kicked off his remarks comparing the Obama administration’s handling of the economy to the replacement referees who officiated the controversial Packers v. Seahawks game on Monday night, “If you can’t get it right, it’s time to get out.”  Most of Ryan’s responses, whether student loan assistance or the Romney ticket’s appeal to immigrants and minorities,  focused on reawakening the American dream by incentivizing and rewarding hard work, increasing marketplace competition, managing the national debt, decreasing taxation, and lowering the cost of goods and services by drastic cuts to government spending and decreasing inflation.

A group of early morning protestors across the street from Byer Steel on North Bend Road.

(Note to self):  Never take even so much as a short break from checking email during election campaign season. You may miss an important detail.   Like the late email  explaining the  parking procedure for the rally. That lesson was reinforced Tuesday morning outside Byer Steel in Carthage, when many of us who thought we were on time for door opening  learned that we missed the bus entirely.  Literally.  After learning the new parking and transportation plan, we raced over to Hamilton County fairgrounds to leave vehicles and hop aboard charter buses to Paul Ryan’s Victory Town Hall at Byer Steel. 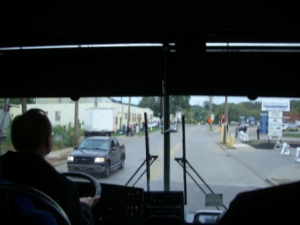 Entering through the back gate added an air of heightened security and intrigue, but also offered a rare and  educational  view of Byer Steel and a look at the manufacturing facility behind the scenes .

Byer Steel back lot with piles of scrap metal.

American flag displayed in the warehouse. 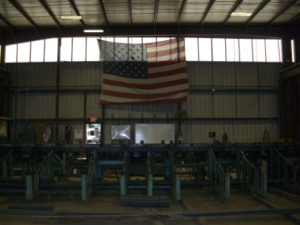 “An American Capitalist”:  Local landscaper who moved back to Ohio from California with his family, because of  high cost of living and cost of doing business in California.

The stage is set, with Byer Steel employees as the backdrop. 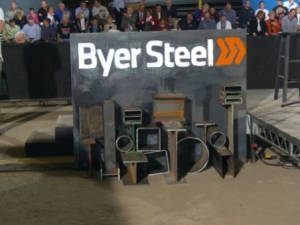 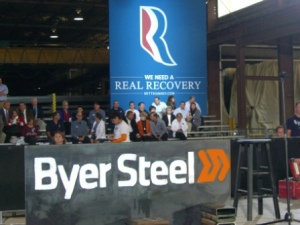 A good picture tells it all… 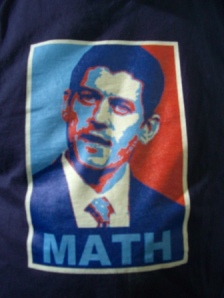 The national debt clock – over $16 trillion and counting.  Your share is $141,992 as of Tuesday morning.  Paul Ryan, “We are losing our independence and control of our sovereignty” with this debt.

The media at work. 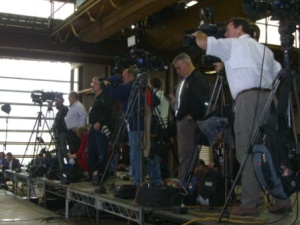 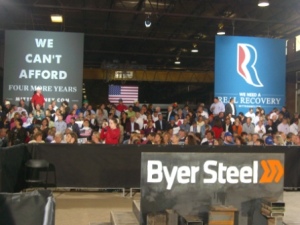 Burke Byer, President and CEO of Byer Steel, describes the founding of his family’s company that started with “a little recycling business”.  He outlined the challenges of competing with Chinese and other foreign companies “that don’t play by the same rules” as American companies.  Says Byer, “We work hard and work smart for opportunities.”  He expressed pride in his employees and asked for a standing ovation on their behalf.

A group of Byer Steel employees looks on.

Rep. Steve Chabot spoke about serving 14 years in Congress with Paul Ryan and he “votes most similarly with Paul Ryan”in the House.  The congressman got in a few jokes about Joe Biden, including the infamous “three-letter word, j-o-b-s”  gaffe from 2008. 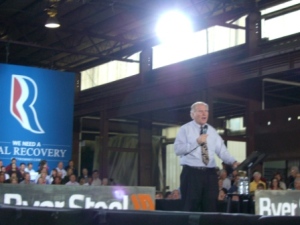 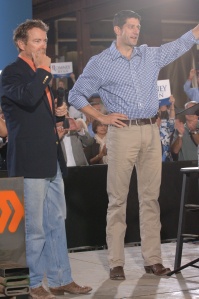 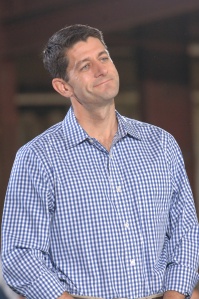 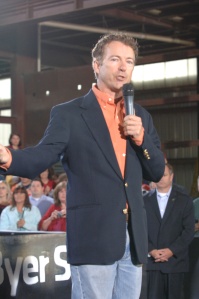 Rand Paul hands off the microphone.

Paul Ryan, “Hope and change has become attack and blame.” 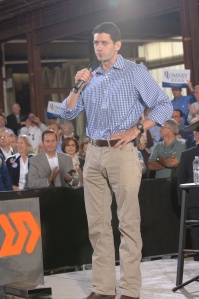 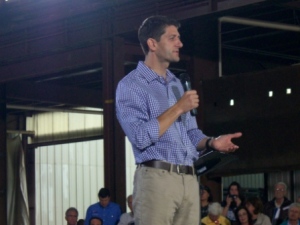 “Most of our jobs in this country come from successful small business.” 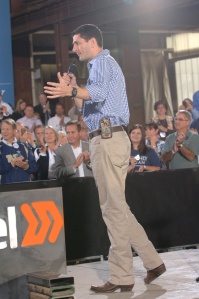 “Both parties are part of this mess.”

“If we don’t turn this around soon, it will be difficult to get the country we know back.”

Paul Ryan  takes a question from Ron Van Allmen, who thanked Ryan and his family “for what they are doing.”

Paul Ryan listens to a question from an attendee. 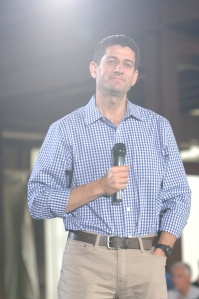 Paul Ryan spoke and answered questions for nearly an hour, before being rushed out to leave for the Romney-Ryan rally at Dayton International Airport.

When we project weakness abroad, our enemies will test us and our allies won’t trust us. 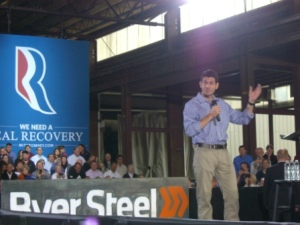 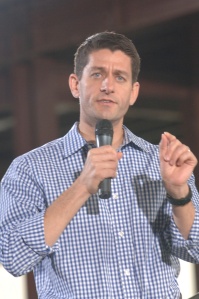 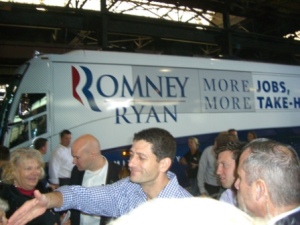 A view inside the tour bus. 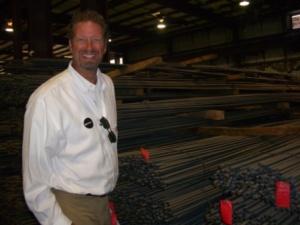